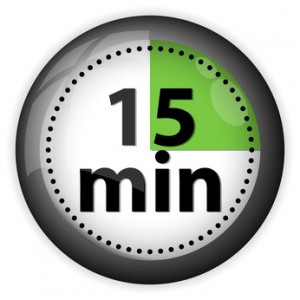 I recently had the pleasure of working with a client who wanted some help with getting her home organized, let’s call her “Mary.” Mary had tried everything to get organized – she hired professional organizers, read books, had friends come help her purge, but all the stuff would just eventually end up back to the way it was. She was very frustrated.
Mary read a book that I had co-authored called “Get Organized Today.” She reached out to me via my website and said she related to the way I gave step by step instructions and that her garage seemed to be the only place that didn’t get to out of control after she had implemented what she read in the book. She asked if I had written anything else for other parts of the home; I did not. I was however in the process of testing a new system that I needed to have a case study for and Mary agreed.
You should know at this point that Mary does not live in my general area, in fact she doesn’t even live in the same state as me. So here’s what we did over the course of the next 9 weeks:
Prep work for Mary prior to week 1: Create a very simple diagram of her home indicating the purpose of each room with the square footage of each room and take a video on her smart phone coming in the front door and walking through the entire house and coming back to go out through the front door. The video needed to allow me to see floor to ceiling in each room also (it was about 7 minutes long). She also made sure she had some specific items for this process – Laundry Basket and a Journal with a Pen.
Week 1: We spoke via Skype and screen shared the electronic version I created of her diagram and split each room into 4 zones or areas and numbered each zone 1 through 24.   We then looked at zones 1 and 2 together and mapped out her plan to work in each zone 15 minutes at a time, 4 times a day. If 4 times was not necessary she moved into the next zone. If she found something that didn’t belong in that zone she put it in the Laundry Basket and the Laundry Basket moved to the next zone with her.  If there were items in the Laundry Basket that belonged in the zone she was now in that’s when she put them away. I explained to her that this is something that happens so often where we find something in one part of the house then go to put it away where it belongs and then get distracted by something in this new area we’re in.
Weeks 2 to 9: Mary worked through each of the zones in the 15 minute increments. It’s important to understand that she NEVER went over that 15 minutes.  She set the timer on her phone and made sure to stop when it went off. Each week we touched base on Skype so she could show me what she had accomplished and where she was struggling. The calls ranged from 10 minutes long to maximum 25 minutes .  We worked through her struggles and found other options.
By working for a cumulative total of 1 hour per day Mary completely organized her home and has been able to work the maintenance schedule of 15 minutes per day in one zone per day. I believe everyone can be on the 15 minute diet and see results the same way Mary did.